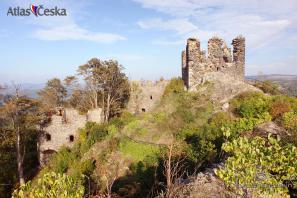 Andělská Hora is a castle ruin south-east of Karlovy Vary. The castle was founded at the turn of the 14th and 15th centuries by noblemen from Rýznburk. The castle, which was originally called Engelsburg, was built to protect their estate. However, when the founder Boreš from Rýznburk died the castle changed hands several times. From 1430 it belonged to Jakoubek from Vřesovice, from 1437 then to the Šlik family and then in the 1660s to Zbyněk Zajíc from Háznburk and from 1466 to the noblemen from Plavno. It was especially this time when the castle was significantly enlarged. The remnants of walling we can see today date back to this time. During the 16th century the castle again hosted a decent number of owners and a century later it became basically uninhabited. In 1718, after a big fire, it was left to its fate.

The ruins nowadays are of the dominant features of the region from which there is a great view, especially to the adjacent Doupovské mountains. The site is open to the public at any time.

The hotel provides a pleasant accommodation for 70 persons. The hotel restaurant with international ...

Hotel Derby is located in the vicinity of the Elisabeth Spa and the spa ...

Hotel Prima is located in district Karlovy Vary – Doubí, approximately 5km from the ...

The spas Karlovy Vary are the biggest, the most popular and famous in the ...

The Gothic castle that was built above the Teplá river valley dates back to ...

The chateau in Bečov nad Teplou is rather young, it dates back only to ...