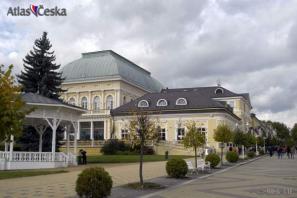 Františkovy Lázně is a town in the Karlovy Vary region with over 5 000 inhabitants. It is the smalllest town of the „West-Bohemia Spa Triange“ (Karlovy Vary, Mariánské Lázně and Františkovy Lázně). Its location not far from the German border and the historical town of Cheb makes it a very interesting tourist destination. The town has preserved its character from the end of the 19th century when the popularity of spas in Europe was at its peak.

The curative effect of the local spa springs was discovered in the 15th century. However, before the actual spas were established, the town was famous for its mineral water (called Kyselka) which was exported in ceramic bottles to the whole of Europe. After the thirty-years-war a problem arose with the increasing number of visitors. They were mostly accommodated in the town of Cheb but the spring was 6km away. That is why a small spa complex was established right by the spring. Františkovy Lázně as such was founded on 27th April 1793. The town was named after its founder, the Emperor Franz I. Františkovy Lázně soon became a very popular destination for spa-seekers from the whole of Europe. The garden-like town with beautiful houses  certainly had much to offer.

Františkovy Lázně was given the status of a Municipal Historical Conservation area in 1992 and nowadays is one of the most frequently visited tourist destinations of the Czech Republic.