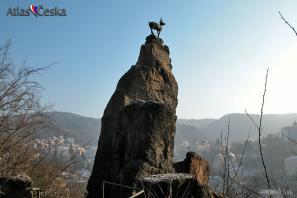 Karlovy Vary is a regional centre of Western Bohemia situated at the Ohře and Teplá rivers conjunction. Not only is it a charming historical town but it also posesses the largest and most famous spas in the Czech Republic.

The original village was founded in the 14th century by Charles IV and in 1370, 8 years before Charles’s death, the town was given a royal status. The original Gothic and Rennaisance appearance was almost entirely destroyed by the fire in 1604. The Baroque appearance met the same destiny in 1759. To town as we can see it nowadays developed its look in the 19th and 20th century.

Nevertheless, the town’s main claim to fame are the spa resorts. When visiting Karlovy Varz do not forget to taste the local speciality – the delicious Karlovy Vary wafers.