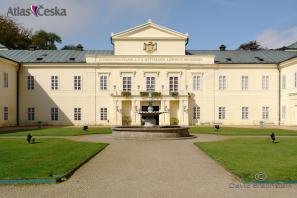 The chateau is situated in Western Bohemia about 20km south-east of Cheb. Chateau Kynžvart has always been remembered as the seat of the Austrian chancellor Klemens von Metternich.

Originally there was only a Rennaissance fortress built sometime between 1585 – 1597 later turned into the Baroque style. After the Battle of White Mountain the chateau fell to the Metternich family’s share to whom it belonged until 1945. At the end of the 17th century the Metternichs turned the decaying Rennaisance fortress into a  Baroque chateau. In 1818 it was inherited by Prince Klemens von Metternich, from 1809 Minister of Foreign Affairs and Chancellor between 1821 – 1848. However, for him the chateau was not impressive enought and therefore had it rebuilt again, this time in the Vienna clasiccism style. In 1828 a museum was opened at the castle, it is one of the oldest museums in Bohemia. Towards the end of his life he stayed at Kynžvart quite frequently.

In the second half of the 20th century the chateau’s condition deteriorated a great deal. It started getting better only after the Velvet revolution in the 1990s. Thanks to the fact that Metternich was a passionate collector of art, the chateau has much to offer. Also, there is one of the oldest libraries in Bohemia. There are more than 24 000 books including 230 cradle-books (no other library in Bohemia has more) and a precious fragment from the Old Testament from the 8th century.

The modern and fully air-conditioned EuroAgentur Hotel Cristal Palace is ...

Our Boarding house is located in a calm part of spa parks and is ...

Mariánské Lázně is a little charming town in Western Bohemia. It is the youngest ...