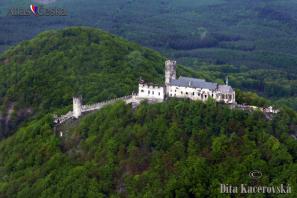 Bezděz Castle is a massive castle ruins dominating the surrounding countryside. The Gothic-style castle was founded in the second half of the 13th century by Přemysl Otakar II. from the Přemyslids dynasty and built between the years 1265 – 1278. Many important events took place at the castle in the early history of the Kingdom of Bohemia. However, after the adjacent monastery was abolished at the end of the 17th century the castle was abandoned and started to deteriorate. From the 35m high tower there is a great view of the whole area and when the weather is good the peaks of the Jizerské mountains and Krkonoše can be seen.

We offer accommodation in a three-bed and four-bed apartments in downstairs of family house ...

The pension is situated in a calm and quiet place in the very centre ...

The pension Mlýn (Mill) at the Mácha lake is situated in the Staré Splavy ...