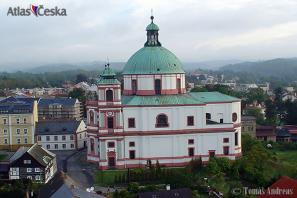 The Dominican monastery with the St.Lawrence and St.Zdislava’s Church is located in a small town Jablonné v Podještědí in the Liberec region.  The monastery was founded in about 1250 by Havel of Markvartice, Duke of Lemberk, and his wife Zdislava Berka of Křižanov (in 1907 beatified; in 1995 canonized).  At about the same time they founded also a Dominican monastery in Turnov.  Original design of the convent buildings is not known much; they had probably been completed prior to 1259 as this year a chapter of Czech-Polish Dominican province took place there. During the Hussite Wars, in 1425, the monastery was burnt down and the monks had to escape to Prague.  The property was then reconstructed in 16th century; in 1683 ‘baroquization’ of the monastery was commenced (completed in 1700).  A new church i.e. the Church of St.Lawrence and St.Zdislava was built mainly thanks to donations of František Antonín Berka, Duke of Dubá.  This beautiful piece of Baroque architecture by Jan Lukáš Hildebrandt was consecrated in 1729.  In 1786 the monastery was abolished.  In 20th century Dominican friars came back to the monastery three times: twice for a brief period of time (1945-1950); (1969-1974); and after 1990 the monastery was returned to the Order for good.  In 1996 the church was promoted to a basilica minor.  The monastery ambit shelters a picture gallery of Míla Doležalová, and a museum of sacral art.  On the occasion of the main pilgrimage (on the last Saturday in May) relics of St.Zdislava displayed in the catacombs are made accessible to the public.

The hotel is situated in the Liberec Region. The two-star complex comprises three objects: ...