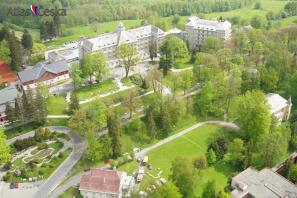 The Spa Jeseník, officially called the Priessnitz Spa, is situated in the most northern tip of Moravia, approximately 2km from the town of Jeseník. The whole spa complex is situated in  beautiful natural scenery and is one of the most frequently visited in the Czech Republic. In its surroundings, unique for its micro climate, there are more than 80 springs. It is the microclimate that makes the place ideal for curing air passages, blood circulation, the nerve system and vegetative nerves. It was the personality of Vincenz Priessnitz which guaranteed a steady influx of visitors. Moreover, the spa is not visited only by those with crippled healt but also by people who want to enjoy the beauty of the mountainous area. Every year the spa is visited by more than 17 000 visitors.

The spa was founded by a farmer Vincenz Priessnitz (1799-1851), known as „water doctor“. When he was young he was mortally wounded by a horse carriage. However, he did not give in and cured himself with local water. The news spread around the area and many people started coming here for the same purpose, asking him for help. The first „spa resort“ was his farm house. Soon this was not adequate and, after pulling it down, Priessnitz built a bigger one which then became the first hydrotherapeutic institution in the world. In 1831 it was given a spa status. Apart from cold compresses, wet wrappings and washing infected areas he used other unorthodox methods such as the sweating cure whereby the sweaty patient was placed into a tank with cold water for a short while.

Hydrotherapeutic methods became very popular and more and more people continued to  come to the spa. During World War II the spa was used as a rehabilitation place for German soldiers. After 1989 the spa was privatised and it is now being used commercially again.