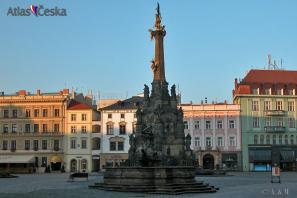 The Holy Trinity Column in Olomouc

Czech Baroque style is represented on the UNESCO world heritage list by the Holy Trinity Column in Olomouc. It was built between  1716 – 1754 and represents a wave of baroque marble, Marian and honourable columns which spread rapidly after the Trident Council in 1562. It was believed that the columns would serve as protection against plaque epidemics. The Holy Trinity Column in Olomouc was no exception. The town of Olomouc was hit by a plaque epidemic in 1713 – 1715. The columns were then adorned with saints which also served the purpose of emphasising the glory and power of Catholic Church. The column was built in Olomouc due to the town’s  clerical and historical significance. Olomouc had been the seat of Moravian bishops since 1063.

The designer  as well as benefector of the column was the architect Václav Render. After his death a number of local craftsmen carried on on his work. The most significiant of these  would be the sculpturor Ondřej Zahner who created twenty one above life-size sandstone sculptures. The group of sculptures was sanctified in 1754 by the Empress Maria Theresia.

With its size, abundant sculptural decoration as well as the whole concept in general the column belongs among the most important European works of art of its kind. It is in fact the biggest cluster of Baroque statues in one sculpture group in the whole of Central Europe. The column is 35 m high and at its base there is a chapel. The sculpture decoration is represented by 18 statues of saints, 12 linkboys, 6 apostle reliefs and two groups of sculptures. In the lower part of the column we can  see, amongst others, see the features of St. Mauritz and another Czech patron, St. Wenceslas, to whom two important Olomouc cathedrals were devoted. The level above them belongs to the Moravian Saints Cyril and Methodius who came to  Great Moravia and also to Czech land patrons St. Adalbert and St. John from Nepomuk whose cult was particularly strong in Moravia. On the third level the saints are connected with the earth life of Jesus Christ, his mother’s parents St. Anna and St. Joachim, his step-father St. Joseph and John the Baptist who was preparing Jesus’s arrival, and St. Lawrence with St. Jerome. The three reliefs represent three Christian virtues: Hope, Love and Faith. In the central part of the column there is a group of sculptures representing the Assumption. On the very top there is a gold-coated dominating feature of the column – a group of sculptures of God the Father, Christ with the cross and in the shining sun a dove symbolising the Holy Spirit. Below the trinity there is the Archangel Michael with a sword and shield.
The column was enlisted in the UNESCO World Heritage under the name ‘The Holy Trinity Column in Olomouc’ as a masterpiece of Central European baroque. The interior of the Trinity is open for public from April to September – 9 a.m – 2 p.m.

Due to its architectural design the monastery in Olomouc, Moravia, is often compared to ...