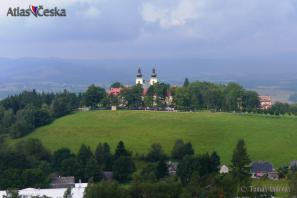 The monastery was founded at an important pilgrimage place on the mount Hora Matky Boží (Mount of the Mother of Our Lord) in Králíky (Pardubice region).  In 1696 Tobias Johann Becker founded a church dedicated to the Assumption of the Virgin Mary.  The church was completed in 1701; and then construction of the Servites’ monastery and Calvary started.  In 1708 eight chapels were built, lining up from the town Králíky to the main entrance to the monastery.  In 1710 a chapel called ‘Holy Stairs’ was erected in the monastery court.  At the end on 18th century, surprisingly, the monastery remained unaffected by state power in a form of reforms of the Emperor Joseph II; but in 1846 it did succumbed to the power of nature i.e. fire due to a lightning stroke.  Despite subsequent reconstruction, in 1883 the Servites’ community perished; their obligations were then assumed by the Redemptorists.  In 1950 they were ejected and the then communist regime established a detention camp for monks from abolished monasteries.   The monastery complex consists of a four-wing ambit with four octagonal chapels; triple-naved basilica of the Virgin Mary and a building of convent.

Spa Bludov is located in the beautiful area at the foothill of the Jeseníky ...