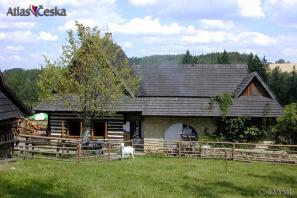 Veselý kopec is an unofficial but deep-rooted name for the open-air museum of folk buildings Vysočina situated in the Chrudim district. Here you can find an exposition of rural folk architecture . Freely scattered bordered farmhouses are worth seeing. They have been transferred here from the Železné hory and Žďárské vrchy regions and they illustrate the way of life and livelihood of small holders in the 19th and early20th century. Its unusual character comes from the fact it is situated in four parts. The first is the Veselý kopec settlement. This one came into existence in 16th century. Today, there is the settlement with a mill. A number of cultural gatherings, which illustrate the life, housing and housekeeping in the past, take place in Veselý kopec. A few examples are fairs, exhibitions and presentation of traditional folk habits and crafts.

Another settlement is Svobodné Hamry. Svobodné Hamry, originally called Hamr nad Kamenicí, came into existence in 15th century around the iron-mill. The Renaissance castle was built in the 16th century, and it was rebuilt in pseudo-Baroque style later. The folk architecture is represented mainly by the ancient bordered pub No. 4 and cottage No. 26.

The next stop is the Bethelem settlement in the largest town of the region Železné hory, in Hlinsko. A unique block of bordered buildings, that were formed over many decades since the mid 18th century, lie in the center of the town on the right bank of the river Chrudimka. The inhabitants of these houses were small holders, especially potters and weavers. Exhibition showing folk craftsmen´s housing and workrooms are placed in the bordered cottages.

The final part is the village of Možděnice, which came into existence in the 15th century as a settlement of peasants, foresters and pond workers. Two iron-mills were working here, aswell the mill and the saw-mill. In Možděnice, you can see folk buildings including the smithy, joiner and wheelwright workroom.Other interesting buildings are the bordered school and several major farmsteadings with bordered and brick buildings. The nearby village of  Dřevíkov, where the Jewish colonization in early 18th century played an important part, can be included in the open-air museum, too. The original brick double-floor body in the so-called Jewish alley has been preserved up to today. The inseparable parts of the buiding are the former still-house, school and synagogue. A Jewish cemetery is situated behind the village.