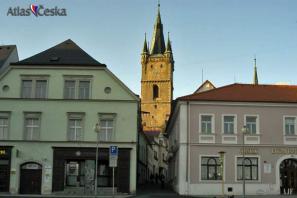 Tachov is a district town situated in Western Bohemia by the Mže river. It was mentioned for the first time in 1115 when Prince Vladislav I gave the village as a present to the nearby Benedictine monastery. Its significance grew a lot during the reign of Přemysl Otakar II who gave the town a royal status and provided it with fortification which was enhanced even more in the 14th century. The ramparts are more than 700m long. Tachov then becamea regional centre. After the battle of White Mountain the town was, as many others, severely punished for not supporting the Habsburgs. Consequently many Catholic Germans moved to the town and were influencing the life there for a few centuries. After World War II all Germans were forced to go.

Tachov is a lovely town with true medieval atmosphere. If you happen to go to Western Bohemia do not miss the opportunity to see it!