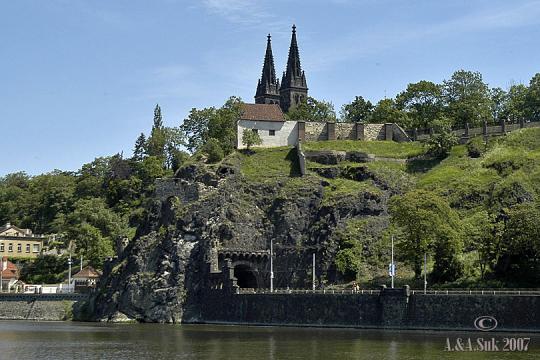 Vysehrad belongs among the most important places of  Czech history, both historically and politically. The area, stretching up above the Vltava river, was already settled in primeval times though the remains found come from much later. Originally this place was called Chrasten but not later than in 11th century it gained its current name. The importance of Vysehrad was enhanced namely by Prince Vratislav who moved here from Prague Castle due to disputes with his brother Jeronym, the Prague Bishop. Vysehrad then became a seat of princes and later kings. A Romanic castle with a palace, St Vavrinec Basilica and St Martin’s rotunda were built here. Borivoj II, Vladislav I and Sobeslav I had their seats here whilst the other princes and kings preferred Prague Castle. It was not until the the time of Charles IV that Vysehrad regained its lost fame again. During his reign a new Gothic castle was built and the cathedral and palace for kings were rebuilt. Between 1348 – 1350 a fortification was erected which incorporated Vysehrad into the New Town. The rampant was damaged during the Hussite wars. Significant changes awaited Vysehrad in the 17th century when it was converted into a military fortress. From the original settlement only the cathedral was preserved. The fortress was abolished in 1866. In the years to come many parks sprang up and the cemetary was enlarged.
Nowadays this important symbol of Czech history is a favourite tourist location which offers many precious landmarks and a unique view of Prague and the Vltava river. Last but not least Vysehrad is one of the best places in Prague for a romantic walk.