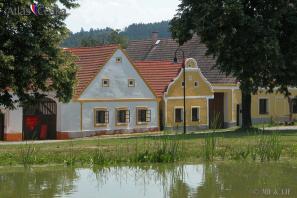 The south Bohemian village Holašovice, enlisted on the UNESCO list, is the best preserved example of the South Bohemain architecture of the second half of the 19th century. It is called the peasant baroque. A great number of houses from the 18th and 19th centuries have preserved the shape so typical for Medieval villages. It is the good condition and genuiness of the houses which offers us an authentic picture of the 19th century village. Its uniqueness also rests in the fact that it is not an open-air museum but a normally functioning village where people live their lives  as people in the 19th century did.

Holašovice is part of the village of Jankov, approximately 16 km from České Budějovice.  The reason for Holasovice retaining its original character lies in its history. The first mention of the village dates back to the second half of the 13th century. Its origin is connected to the colonisation era which was started by Přemysl Otakar II (13th century) when the border regions were settled for the first time. In the first half of the 16th century the village was hit by a plaque. The consequences were tragic, all the original Czech inhabitants died. German collonists moved into the village straight afterwards. The arrival of the peasant baroque can be dated back to the years 1840 – 1880, a period of economic reforms resulting in the growing prosperity of Czech villages. Many new houses started being built at that time, others, originally made of wood, were rebuilt. With the standard of living growing many peasants could afford a more impressive residence. The uniqueness of Holešovice lies in the fact that despite the construction boom it was able to retain the Medieval village layout. Nowadays it is the best preserved example of a South Bohemian village combining both the folk construction activity and the original character. During World War II the village became part of the German Reich, the Czech minority were forced to move further north to the centre of the country. After the war it was the other way round. The Germans had to leave and the Czech inhabitants took over the village. After the war no reconstruction was carried out in the village and therefore it remained virtually untouched. First the state and later UNESCO ( 1998) declared that Holasovice represents unique village architecture.

The historical centre of the village consists of a village square of a rectangular shape (210 x 70 m) surrounded by farms. Altogether there are 23 estates (120 houses) which are interconnected by small gates. We can find here not only granges, barns and stables but also asmith’s shop, a pub and a chapel.

When visiting Holašovice one will without doubt be captivated by its charming peasant atmosphere made complete by its current 140 residents. Holašovice appeared in the film The Bartered Bride based on Bedřich Smetana’s opera.  Every year, the last but one weekend in July „Peasant celebrations“ take place here. It is a typical Old Czech fair where more than 230 traditional crafts are demonstrated.

The luxorious hotel Grand is located in the very centre of Český Krumlov. The ...

Netolice is situated on the site of a former Slavic fortress. Later, in the 10th ...

Kleť planetarium is situated south of the peak of the hill of the same ...