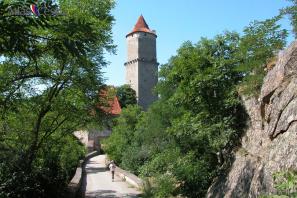 The Early – Gothic Zvikov castle is situated above the joining of  the rivers Otava and Vltava. The castle was a royal residence since it was built by the Przemyslaw dynasty in the first half of the 13th century. The castle was a favourite place for the Bohemian kings. In the time of Charles IV, the castle was added to the list of  castles that could not be sold or pawned. However, his succesors did not respect this order. From the hand of the Crown the castle got first in the hands of the Rozemberg dynasty, then later in hands of Schwamberg and Eggenberg dynasty. The Schwarzenberg dynasty, who attained Zvikov castle in the 19th century saved it from total devastation by reconstructing it.

The dominating feature of the castle is the prismatic residential Hlizova tower. In that tower, the Czech crown jewels were held for some time. The courtyard  surrounds the castle, which is pentagonal in shape. There are both ground-floor and first-floor openings with beateous gothic arcades along with lancets. In the north and west wing there are residential rooms. In  the east wing is situated  a large representative hall with a cross vault.  On the first floor of the south wing  is one of the most beautiful severities of Czech early-gothic style –the castle chapel of Saint Wenceslaus. Zvíkov is deservedly called – „the king of Czech castles“.

Hotel Bílá růže (White Rose) is situated in the very centre of the town ...

The castle, and later on the chateau, called Orlík had been rising on the ...