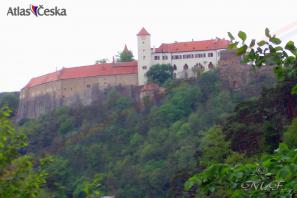 Bítov castle is one of the largest and oldest castles in the Czech Republic, rising above the Vranov reservoir on the river Dyje. The first references to the castle date back to 1061 and 1067, when it was the defence castle on the southern border. Under Přemysl Otakar I it became the centre of the region. In 1230, it was conquered by the Austrians, still as a wooden castle, but for its strategic character it was rebuilt in stone in Gothic style. After the death of the last Premyslid died, the Lechtenbourgs gained possession of it. At that time, the castle experienced great reconstruction works. The Chapel of Virgin Mary Ascension, the bottoms of today’s palace, both entrance towers with side wall and southern wing came into existence. In 1811-1863, under Daun Counts the declining castle was modified into the present neo-Gothic appearance.

Two tool towers passed on from the Roman period. The present appearance of the castle comes from the neo-Gothic reconstruction of the 19th century, most of the interiors are arranged in this style. In Bítov are situated valuable natural historical collections coming from collector activity of the last castle proprietor. The surrounding forest was modified in the natural park with a number of neo-Gothic buildings.