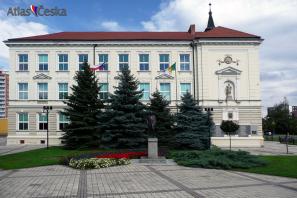 The district town of Břeclav lies in the South-Moravian region, not far from the Austrian border. The river Dyje runs through the town, which has about 26 000 inhabitants. It is an important rail junction and also a much-sought-after tourist destination, it neighbours a small area of southern Moravia, the Lednice-Valtice area, which is on the list of UNESCO World Cultural Heritage list.

The origins of the village are connected with the Břeclav castle that was established in the half of the 11th century bz Prince Břetislav I. In the first half of the 16th century the castle,  together with Nová and Stará Břeclav, was attained by a powerful Moravian family from Žerotínové, which they later rebuilt in Renaissance style. Břeclav was considerably spoilt during the Thirty-Year War.

In 1638 the family of  Lichtenstein, who had already held the neighbouring Valtice and Lednice took possession of it. The region became strongly recatholized. Břeclav recovered from the hard years very slowly. The turning point was in the 19th century with the implementation of the railway. Thanks to this, the industrialization was made possible and the importance of Břeclav increased, so it could be finally proclaimed a city in 1872.

The chateau, which is related with the beginnings of Břeclav history is not accessible for the public, but you can visit many other interesting monuments. For example, the Church of Virgin Mary Visitation or the modern Church of St. Wenceslas. Also, the Jewish community  has marked the face of the town, especially their cemetery and their Synagogue from 1868, which serves today for cultural-social purposes. Břeclav is most popular in Septembe when good wine and stum lovers visit the town. Many tradiitional tasting actions are connected with wine as well as the Saint-Wenceslas feasts, that are the exhibition of local folklore.

The Empire-style Boskovice Chateau is situated in the town of the same name. It ...