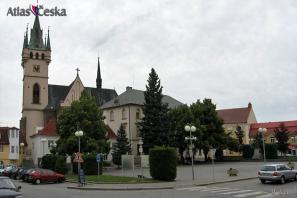 Humpolec is a city in the Vysočina region. The Humpolec settlement is first mentioned in historical sources from the 12th century. The settlement belonged initially to a German knights order, then a Želivec monastery and finally to Knights of the cross with the red star and a range of aristocratic families. During the 13th century this area gained importance thanks to silver mining and the settlement developed quickly. Under the Lords of Dubá in the end of the 14th century, the settlement was promoted to town. The origins of cloth tradition date back to the end of the 15th century; the period following the mining decay. The first manufactures were established in the end of the 18th century and the importance of the Jewish settlement increased. The cloth industry reached such a development, that Humpolec was called “Czech Manchester” in the 19th century. The dominating feature of the town and the oldest building monument at the same time is Gothic decanal temple of St. Nicolas established by Želivec premonstratensians in 1233. In 1722-1729 it was rebuilt in Baroque. We can find there also the monuments reminding the Jewish tradition in Humpolec, the Jewish quarter, cemetery and Synagogue. You can also visit the remains of the medieval Orlík castle.