The Pilgrimage Church of St. John of Nepomuk at Zelená Hora, - Vysočina Region

Vysočina Region > The Pilgrimage Church of St. John of Nepomuk at Zelená Hora 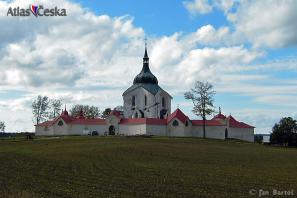 The Pilgrimage Church of St. John of Nepomuk at Zelená Hora

The Pilgrimage church of St. John of Nepomuk is not far from the Moravian city Ždár nad Sázavou. The transition of the Gothic into the Baroque style brought about in Bohemia at the beginning of the 18th century an architectural style referred to as Baroque Gothic, a style which is absolutely unique and does not appear anywhere else in Europe. The most famous building to display this style is the Church of St. John of Nepomuk. It was built in the 1720s and its undoubtedly the most significant work by J. B. Santini Aichel who masterfully managed to combine baroque and gothic styles. The purpose of the church, which was financed by the Cistercian monastery, was to glorify John of Nepomuk, whose canonization took place at the time the church started being built,  as a mighty patron and saint.

The actual church is permeated with the number five originating from the legend St. John of Nepomuk. According to the legend he was thrown into the Vltava after being tortured but  his body drifted out and a five-star crown appeared above it, hence the church’s five-pointed star shape. Also, the church has five exits, five chapels, five altar alcoves and two sets of five chapels around the central area. On the main alter there are five stars and five angels symbolising five wounds of Jesus Christ as well as five letters in the latin word „tacui“ (I was silent) and  above all five stars in the martyr auroela which, according to the same legend, appeared in the Vltava river. The resemblance does not end here though. In the middle of the building, on the very top of the dome, there is a gigantic tonque in a burning circle as a symbol of John of Nepomuk, a martyr of the confessional secret. It also appears in the the shape of the broken windows which are part of lantern chapels above the entry. The legend says that John refused to give out Žofie’s confessional secret to her husband, king Vaclav IV, who then punished him severely by having him thrown to the river. The main alter depicts a martyr being taken to heaven by angels. The side altars are dedicated to the four evangelists, John with an eagel, Mark with a lion, Luke with a bull and Mathew with a book. The church is surrounded by a cemetary and ambit in the shape of a ten-pointed star.

The hotel and pension Pegas is situated between the villages Tři Studně and Vlachovice. ...

Žďárské hills are a part of Bohemian-Moravian Highlands. More than a half of the ...