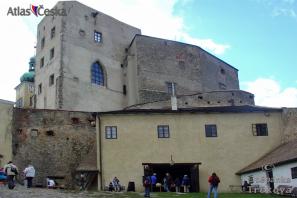 Originally a Romanesque fortress built in 13th century, later rebuilt in Romanesque and Gothic style; today a wonderful example of Renaissance and Baroque architecture.  The castle’s core is formed by two towers in Romanesque style and a Romanesque-Renaissance palace.  Visitors shall pay attention to a valuable early-Gothic castle chapel, too.  One of the oldest and largest Czech castles displays original furniture and artworks from Gothic up till Baroque era such as the sculpture of the “Madonna of Buchlov” dated second half of 14th century (the castle displays a plaster copy).  Visitors may admire also extensive 19th century collection of natural objects.

The sulphur spa Ostrovská Nová Ves is situated in the very middle of the ...