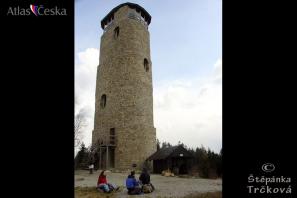 The observation tower is situated on the top of the Brd hill (587m). It is a very popular tourist destination, people have been coming here for decades though the actual tower was opened before 2004. The original wooden tower was taken down in the 1970s and a foundation stone of the new one was laid down in 2001. It is made of sandstone... and how is it possible that sandstone appeared on the top of the hill? Believe it or not, it was carried here by volunteers! The tower is 24 m high and from the top there is a fantastic view, when the whether is good you can see Roháče, Malá Fatra, Jeseníky, BEskydy, Malé and Bílé Karpaty and Pálava. If you get really lucky you can get a glimpse of the Alps.

Originally Kroměříž was a market village at the crossroad on the main commercial route. ...