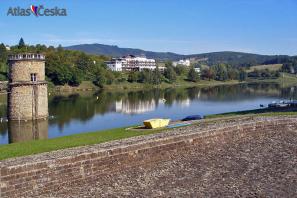 The stream Horní Olšava, sometimes called also Šťavnice or Ščavnica runs through the Luhačovické valley. Its source is in Valašskokloboucko beneath the hill Klokočí. A valley reservoir was built on this stream in 1928 about 2 km from the centre of the spa. Luhačovická dam had to stop the floods in the region. The dam construction began in the Summer of 1912 and its original purpose was to protect the region from floods. The construction process was stopped after the outbreak of the First World War and didn’t resume until Autumn 1921. The dam started functioning in 1930. Its height is 17 metres, length 230 metres and the width is 6 metres. The dam is made of clay-sandy loam. Its capacity is about 107 000 m3. The quality of the reservoir was checked during floods in 1996, Luhačovice was not very affected by water-wave thanks to good consttruction of the dam.

Over time, the dam has become an important centre of recreation. Its banks are literally besieged on hot summer days. There are many hotels and camp-sites, you can hire boats and mountain bikes and also get to know the area by taking a horse and cart ride! you can buy sightseeing on horses and carriages and have knowledge of the neighbourhood. The dam is also well-known thanks to its fishing events, the largest of which sees up to 750 competitors participating every year in Spring and Autumn.

Villa Jiřinka provides you with modern and non-smoking type of accommodation in the centre ...

The Dominican cloister with a Church of the Assumption of the Virgin Mary is ...