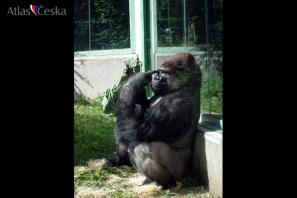 The Zoo in Lešná, Zlín is one of the most beautiful places in the whole Moravia. The part of the area is Lešná Chateau and the manor park. Individual exhibitions in the Zoo are sensitively set in the environment of historical Lešná park, where you can find more than 1140 species of decorative trees and herbs. The romantic atmosphere is added to by the Lešná Chateau. The Zlín Zoo doesn’t consist of cages, but it is a modern bio-park where mammals and birds live together. The first exotic animals were gathered in Lešná in 1930 as a personal delectation of the owner of the Lukov domain, family of Seilerns. They were stags, small antelopes, rowans and emu runners, plus a large number of small birds which were placed in the greenhouses. In May 1945 the Seilern family left Lešná, but the superb Lešná area preserved. The Zoo was officially opened as early as 1948. The ZOO was considerably extended during the following 40 years, but it experienced further rapid development in the nineties. Today’s Zoo has 48 ha of exhibition grounds and breeds around 200 species of animals. The area is structured in zoogeographical sections, so the visitors can gain knowledge of the typical and most famous representatives of the four continents – Africa, Asia, Australia and South America.

The outlets truly simulate the original homeland of  breeded animals. From the African species, you will see elephants, snub-nosed rhinos, Rothschild giraffes, lions, African antelopes, ostriches and in primate pavilion you can observe gorillas. The Asia region is represented by Siberian tigers, Asiatic black bears, apond of gibbons and Asian aviary. In South American region, you can find exhibits of Amazonia with squirrel monkeys and the aviary of big macaws, in addition to the anteaters, lamas vicuna and alpaca, tapirs, maras, sealions and Humboldt penguins. In the Tropical Yucatan hall, Australia is represented by kangaroos and emu runners and also by cockatoos. The vivaria with snakes are located in the chateau basement. The atmosphere of the area is enlivened with little streams, a number of artificial ponds, fountains and waterfalls in the exhibition premises. Children can enjoy an entertainment corner, a choo-choo ride, domestic parrots, pony or camel riding. During July and August you can also visit a designated animal feeding area. There are four restaurants in the area for refreshments and meals.