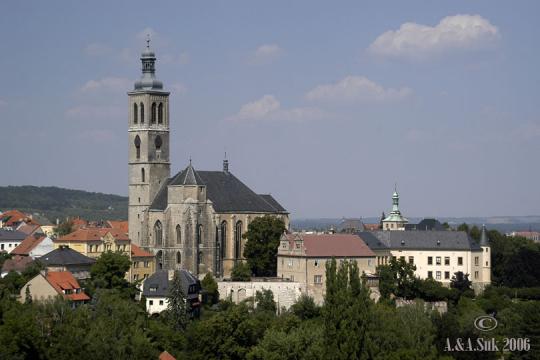 Kutná Hora is one of the most charming towns in the whole of the Czech Republic. Its centre, the Cathedral of St. Barbara and the Cathedral of the Assumption of Our Lady were included in the UNESCO World Heritage List in 1995. the history of Kutná Hora, a town in Central Bohemia not far for Prague, is inextricably linked with silver which was mined here for centuries. Originally a mining settlement by the Vrchlice stream, it changed rapidly during the second half of the 13th century developing into a royal town where the Prague groschen was minted. Kutná Hora was until the 16th century the second most important town in the Czech kingdom. Its charm and grace reside in the town´s economic wealth. There was enough money to built many spectacular buildings over  the centuries in a number of archiectural styles most of which have survived up to the present day, forming a breathtaking panorama. Every street, house and church have played a part in the town´s long and eventful history.

As far as the UNESCO World Heritage List is concerned, in addition to the historical centre there is also the Cathedral of St. Barbara and the Cathedral of the Assumption of Our Lady in Sedlec. In the historical centre we can find a great number of Gothic, Renaissance and Baroque houses, all forming a unique medieval urban structure. Other historical landmarks include the former mint Vlassky dvur (Vlašský Courtyard), the Gothic burgess Stone House, the Gothic church of St. James and the Jezuit campus or Convent of St. Ursula.

The predominant feature of Kutná Hora is undoubtedly the Cathedral of St. Barbara. It was founded in 1388 and its first master builder was Jan Parler, a son of Petr Parler, a master builder of the St. Vitus Cathedral in Prague. The construction was interrupted during the Hussite Wars until 1482 when Matej Rejsek, another famous constructor, was placed in charge. When silver production decreased the Cathedral was closed by a provisional wall. In 1626 it was given to the Jesuits and partly transformed in the Baroque style. After that the cathedral was left unfinished for more than 300 years. Only between the years 1884 – 1905 did it achieve the appearance we can admire today. The cathedral was dedicated to the patron saint of miners, St. Barbora, and its interior was decorated by several remarkable fresco paintings with mining themes.

The Cathedral of the Assumption of Our Lady in Sedlec was founded around the year 995 and is the oldest Cistercian monastery in Bohemia. Again, it was the financial position of Kutná Hora that enabled the rebuilding of a monstery church into a monumental cathedral between 1280 – 1320. As with the Cathedral of St. Barbora it went through a Baroque reconstruction carried out by J. Santini.

For visitors to Kutná Hora, located 60 km east of Prague, there are also, among other attractions, a Silver education trail and Silver Musuem.

The monastery was established by Miroslav, a feudal lord, in 1142.  The abbey was ...

The synagogue was built in the 19th century during the times of civil and ...