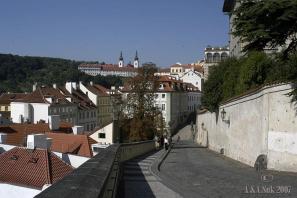 Hradcany was founded by the Highest Burgrave Hynek Berka from Dube around 1320 as an independent town. The town was formed by a built-up area around today’s Hradcanske square that stretched up to today’s U kasaren street. In 1375 Ujezd, Pohorelec and Novy Svet were included in the town by Deputy Burgrave Ales from Malkovice. In 1420, during the time of the Hussite wars, Hracany was destroyed by fire. The area was renovated in the 1440s. At that time the built-up area comprised mainly of aristocratic houses and canon houses. In 1598 Hracany became a royal town and in 1784 it merged with Prague. Nowadays Hradcany includes many precious historical and cultural landmarks, of which the most significant is Prague Castle – the seat of kings, ceasars and, since 1918,  presidents. It belongs to the most frequently visited Prague localities.

The family hotel with a restaurant and garden is situated in the northern part ...

Prague Castle belongs to the most remarkable cultural and historical monuments not only in ...

St. Vitus cathedral is the most beautiful and ostentatious church in Prague. In its ...

Hradcany was founded by the Highest Burgrave Hynek Berka from Dube around 1320 as ...