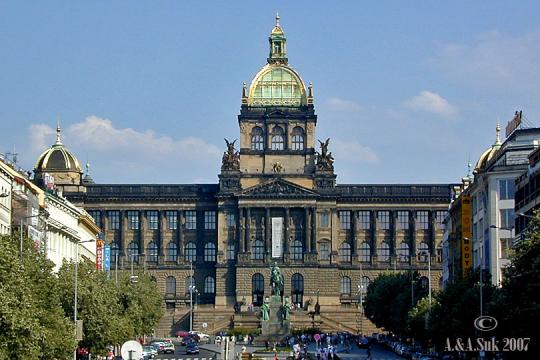 The National Museum building was built between 1885 – 1890 according to the project of J. Schulz on a place where the Horse Gate used to be. It was destroyed in 1875. The institution of the National Museum as such came into being in 1918. Originally it was a patriotic project of Czech aristocracy, however, eventually it became part of Czech national revival.

The National Museum is certainly an outstanding building. Indeed when the Russians entered the city in 1968 they believed this building to be the seat of government and started firing at it – consequently bullet holes can still be seen in the walls today.The actual exhibits however might be less appealing, unless you have an interest in fossils, minerals and stuffed animals.

The Bedrich Smetana Museum is situated in a beautiful neo-Rennaisance building right next to ...

The museum is situated a few minutes away from the tram and metro station ...