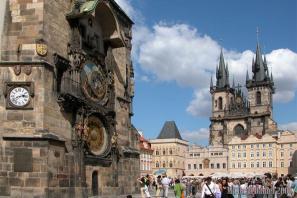 The first settlements in the Old Town area originated in the Romanic style. The whole territory was fortified after 1320. An area called Havelske mesto, situated approximately between Ovocny trh and Zelezna street, was included in the Old Town as well. It had its own walls and merged with the Old Town in the 13th century. At the place of today’s Havelska Street there used to be a market place called the New Market. In 1347 Charles IV’s coronation feast took place here. When the Old Town walls were being built some neighbouring areas were also incorporated into it. In 1337 the Town Hall was established and in 1348 a university founded. Many important administrative and clerical institutions were placed here. Worth mentioning is undoubtedly the Bethlehem chapel where Jan Hus used to preach before he was burned to death by the Catholic Church. In the Old Town Square, the centre of the Old Town, many important events connected with the history of Prague and the Czech lands have taken place. The Old Town is one of the most important parts of the city, many historical, cultural and religious places of interest are located here. Therefore it is one of the most frequently visited parts of Prague.

The Rudolfinum is one of the most significant neo-renaissance buildings in the Czech ...

The Charles Bridge is the oldest preserved Prague bridge that still serves its original ...

The area of today’s Old Town Square used to be a market which had ...

The first settlements in the Old Town area originated in the Romanic style. The ...