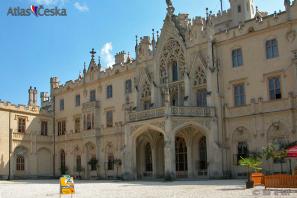 The Lednice-Valtice Area was included in the UNESCO list in 1996. The area (283,09 km2) combines both the unrivaled  beauty of natural scenery with two spectacular chateaus. Over many centuries The Lichteinstein Family created here an architectural masterpiece which is considered to be the biggest man-made area in the whole of Europe. Aswell as the two chateaus the area is interlaced with a system of ponds, forests, parks as well as agricultural land, tree alleys and many romantic buildings and pavilions. The Lednice-Valtice microregion is located 50 km south of Brno. It borders with Austria in the south and a protected natural area Palava in the west. Its northern and eastern borders are formed by the Dyje river.

The most favourite places with tourists are without doubt the chateaus Valtice and Lednice. They are interconnetected with the Bezruc alley established in 1715. The history of the area dates back to the 12th century when a huge castle was built here by the Seefeld Family. Later the village of Valtice was founded in its vicinity. It is presumed that it was was given a town status between the years 1192 – 1227. It changed his owner many times in the centuries to come. However, in 1387 the Lichtenstein Family settled down in this part of the country for more than just a few decades. They rebuilt the castle many times and in the 16th century they turned it into a Renaissance chateau. During the Thirty Years War the chateau was severely damaged by the Swedish troops. The damaged complex was then given its current appearance – a Baroque residence. The reconstruction was not finished until 1730.

At the place where the Lednice chateau now stands there used to be a Gothic fortress ( mentioned for the first time in 1222), which was given to the Lichtenstein Family by the Margrave Premysl. The chateau was then rebuilt in both Renaissance and Baroque styles. However, the current appearance of the Lednice chateau is the result of Neo-Gothic reconstruction which was carried out in the 19th century. Part of the original walling has been preserved but the new facade was completed with a number of additional features such as battlements, balconies, bay windows, chimneys and little spires. The interior with beautiful carving decoration gained the romantic Neo-Gothic appearance as well. Worth mentioning are expecially remarkable wooden stairs in the library which led to the princes‘ bedroom which was created without using a single nail.

The Lednice chateau area was later completed with the ostentatious riding-hall, minaret and greenhouse according to the London winter garden pattern. The final shape was given to the chateau in the 19th century during the Romantic period hence the many Romantic buildings such as the temple of Apollo, the obelisk and Rendez-vous or Empire Temple of the Three Graces. The minaret inparticular arouses visitors‘ attention. Alois Liechtenstein originally wanted to build a church here but did not manage to obtain a plot for it so he deciced to raise an Islamic symbol instead. It is the oldest preserved prayer tower in the whole of the Czech Republic and the highest of its kind in a non-Islamic country.

The Lednice-Valtice complex offers many more tourist attractions. There is a countless number of opportunities for trips either on foot or by bike. The so-called Lichtenstein paths are more than 90km long. Another wonderful experience is  a ride on a boat on the Dyje river or a stroll round the lakes. For wine lovers there is the Wine Education Trail  in Valtice.

My hotel is situated in the town of Lednice in Moravia, in the heart ...

The Baroque castle in Mikulov occupies a site on the hill where there was ...