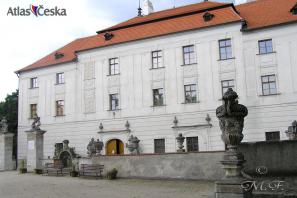 The Renaissance chateau rebuilt in Baroque style is situated in Třebíč district, in the Vysočina region. Since the 13th century, the place of the present chateau had a water fortress, whose owners were the Lords of Lomnice. In the seventies of the 16th century, Václav Berka of Dubá rebuilt the fortress as a Renaissancechateau. Today’s appearance was given to the chateau during the ostentatious reconstruction in Baroque style under Paar Counts in the twenties of the 18th century. The French park with four lakes was created around the chateau at the same time. The Moravian Provincial Museum assumed the chateau under its control in 1972 and it established there the depositories of scientific wards.

The Jewish culture and tradition that have always been an important part of Czech ...

Benedictine monastery and chateau in Třebíč

The Benedictine monastery stopped serving its purpose in the 16th century when it was ...