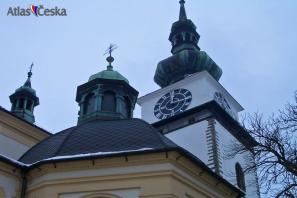 The Jewish culture and tradition that have always been an important part of Czech history are also represented in the UNESCO World Heritage List by a uniquely preserved Jewish Quarter in a southwest Moravian town of Třebíč. Třebíč lies between Brno, Jihlava and Znojmo. There is an abundance of various clerical monuments of which the most famous one is the Roman-Gothic basilica of St Prokop which is also UNESCO listed.

In Třebíč we can see a rare and unique example of a close co-existence of the Christian and Jewish cultures from the Middle Ages to the 20th centrury. The origins of the town date back to 1101 when the Benedictine monastery was founded by the Moravian Přemyslids, Oldřich from Brno and Litold from Znojmo. Thanks to its position on both sides of the Dyje river as well as the generosity of the founders, the town became a centre of clerical life and education. The first mention of the Jewish settlers comes from the year 1410 and the first Jewish community dates back to the 16th century. From the end of 18th century there was one of the most populous Jewish communities in the whole of Moravia. The Jewish Quarter is precious because of  its original houses and original historical layout. On a very cramped space we can see  characteristic attributes of Jewish urban design. There is quite a dense built-up area, winding little streets, dark corners, archways and romantic little squares. There are around 120 blocks of flats completed with other former Jewish institutions – town halls, schools, a rabbinate and the poorhouse. In the the Rear synagogue there is a Jewish Quarter history exhibition. The Front synagogue serves nowadays as a house of worship for the Czechoslovak Hussite Church. At the present time there are no original inhabitants in Třebíč, therefore the synagogues do not serve their original purpose.

There is also a Jewish cemetery in the town. It was most likely founded at the beginning of the 17th century (mentioned for the first time in 1636) and it was extended in 1888. With the area of almost 12 ha it is among the largest in the Czech Republic. There are more than 11 000  graves and 3 000 tombs (the oldest one from 1625), some of them are very precious Baroque and Classicist types. Part of the cemetary, which is one of the best preserved and largest Jewish cemeteries in Europe, is a ceremony hall built in 1903 with uniquely preserved interior. Funeral services take place there up to the present day. After Jerusale, the Třebíč Jewish monuments are the only ones which were individually enlisted in the UNESCO list in 2003.

The Roman-Gothic basilica of St Prokop was added to the UNESCO list in 2003. Originally it was dedicated to the Virgin Mary, however, after the devastation it suffered during many wars, it started being used for secular purposes from the first half of the 16th century. After its restoration it was dedicated to St Prokop and used by Church again. The most precious part of the basilica is the entry portal dating back to the 13th century. It was not rediscovered until 1862. Among other valued parts is a huge Roman crypt whose Gothic vault is supported by 50 columns and semi-columns, each of which has an original capital. The original ceiling ornamentation,  more than seven centuries old, evokes a Medieval atmosphere. At the end of the 16th century the crypt was used as a brewery.

Benedictine monastery and chateau in Třebíč

The Benedictine monastery stopped serving its purpose in the 16th century when it was ...

The Renaissance chateau rebuilt in Baroque style is situated in Třebíč district, in the ...

The large Baroque chateau complex in Jaroměřice nad Rokytnou belongs to the largest and ...