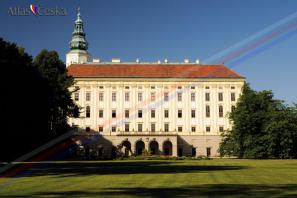 Originally Kroměříž was a market village at the crossroad on the main commercial route. Its history is tightly connected with the history of the Olomouc bishopric, archbishopric and liege villages of Olomouc bishops. Kroměříž was promoted to a town in the 13th century. The original castle and later chateau served as a residence of Olomouc bishops. At the turn of the Middle Ages and New Age it was damaged several times in religious wars (the Hussites and the Swedes) but was repeatedly restored.  A defining time in the history of Kroměříž was the year 1848 when the Reichstag was moved here from Vienna. In this period of time Kroměříž became a true pearl of Moravia – Moravian Athens – as it is often called. hundreds of tourists every year come here to see the chateau gardens and the Archbischopic palace.

The place where Kroměříž Chateau stands today is brims over with very rich history. In the time of Great Moravie there was a settlement where later in the 13th century a gothic castle was built. At the beginning of the 16th century the chateau  was redeveloped in the Renaissance style and became a residence of Olomouc bishops. During the Thirty Years War it was damaged by Swedes and later redone in the Baroque style.

The chateau’s interior decoration is very rich and a large amount of original equipment is on display. Not to be missed are the throne hall, feudatory hall, hunting hall, tsar chamber, old library and summer flat. On the second floor there is a castle picture gallery, the second most prestigious and valuable in the Czech Republic. Many of the paintings displayed here are of world significance. The authors presented here are for instance Lucas Cranach, Hans von Aaachen, Jacopo Bassano, Paolo Veronese, Tizian (Appollo and Marsyas), Jan Bruegel, Anthonis van Dyck and Johann H. Schönfeld.

There are two beautiful gardens connected with the chateau. The Under-Chateau Garden was originally a garden used for growing flowers and vegetables. Later when the garden was redesigned  in the Baroque style it became a natural part of the chateau. In the 19th centrury it was transformed into a Romantic English park with three lakes and a number of romantic buildings – Pompeian colonnade, Colloredo colonnade, Chinese pavilion and Max’s Courtyard. The Flower Garden was designed in a Renaissance style in the middle of the 17th century. In the very middle there is a octagonal richly decorated rotunda. The Garden is surrounded by a spectacular colonnade (240 m long). The gardens in Kroměříž deservedly belong among the most prominent garden architecture sites in the whole of Europe.