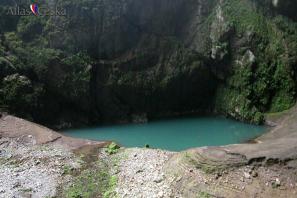 The Macocha Gorge is the most famous gorge of the Moravian Karst and it is a part of the Punkva cave system. The gorge was formed probably thanks to the break-out of a weakened roof of the large underground dome, flown with Punkva river. The area of the abyss is about 174 x 76 metres; the depth is 138, 5 metres to the level of Dolní Lake. Under the water-level of Dolní lake, other underground spaces are hidden, explored to the depth of 187 metres so far. The bulky proportions of the abyss transmit the day light to the whole area, so in the karst classification we class it as the “light hole” gorge. We can peep into the gorge from two foot bridges – the upper one from the Macocha hotel and from the bottom one. For access to the gorge, you can also use the cabin lift from the entrance of Punkva caves or the road from Ostrov u Macochy.

The Empire-style Boskovice Chateau is situated in the town of the same name. It ...